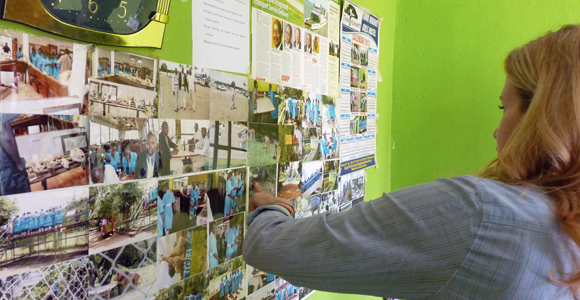 Our team is committed to increasing the global nurseforce.

Meg brings to The Gretta Foundation her love for nurses and passion for women’s empowerment.

From 2006 to 2008, Meg was the Community Relations Director for Global AIDS Interfaith Alliance (GAIA), a nonprofit organization that provides community-based HIV prevention and care in Sub-Saharan Africa. In her role, Meg oversaw and maintained GAIA’s faith-based support.

Prior to entering into the nonprofit field, Meg worked in the corporate sector. In her roles as senior property manager and a licensed sales associate, she attained comprehensive skills in business operations, annual budgeting and forecasting, project management, leasing and marketing and financial reporting through her 13 years in multitenant office and high-rise commercial real estate.

Secretary and Director, The Gretta Foundation

For the past 14 years Tania has worked as a community volunteer in the areas of education and philanthropy. Most notable of her numerous positions, Tania has managed a faith-based program for seven years and expanded it into the community.

This program provides and distributes gifts during the holiday season and includes a program that recycles and repairs donated bikes for distribution to the working poor. Tania was also a board member for five years for a fundraiser that benefited the local school district’s education foundation. Tania has been the liaison for numerous nonprofit philanthropic organizations including Global AIDS Interfaith Alliance, Monument Crisis Center, and Fresh Start.

A graduate of Saint Mary’s College with a B.A in History, Tania has a professional background in the wholesale sector. Tania worked for six years for a national food manufacturer and distributor most recently as the Director of Administration. Responsibilities included all aspects of human resources as well as oversight of the sales support team. Prior to that Tania worked for a wholesale French import firm in several capacities but lastly as a Business Manager. Responsibilities included purchasing, inventory control, foreign relations, and sales.

Judith was, until 2008, Chief Executive Officer of the Geneva-based International Council of Nurses (ICN), a federation of more than 130 national nurses associations. Prior to joining ICN in 1996, Oulton served for seven years as the Executive Director of the Canadian Nurses Association and the Canadian Nurses Protective Society.

During her tenure as CEO of the International Council of Nurses, Oulton oversaw the expansion of ICN membership, the development of new models of governance, the implementation of innovative programmes for health and nursing services in developing countries and the initiation of new partnerships and strategic alliances. She spearheaded the creation of the World Health Professions Alliance (WHPA), the global alliance of the nursing, medicine, dentistry, physiotherapy and pharmacy professions.

Her career has included experience: in government as Senior Nursing Consultant with major responsibility in hospital organisation and budgetary audits and as the Director of Strategic Planning for the New Brunswick Department of Health and Community Services; in education as a member of the Nursing Faculty, University of New Brunswick; and in nursing administration and service in a variety of clinical areas. She was also Chair of the Health Action Lobby (HEAL), a coalition of more than twenty Canadian health and consumer organisations. Oulton has served as a technical advisor to the World Health Organization on numerous occasions and is a founding member of the Global Health Workforce Alliance, a partnership of national governments, civil society, international agencies, finance institutions, professional associations and others and hosted by WHO.

Oulton’s particular areas of expertise include human resources development, governance, strategic planning, policy, leadership and regulation. She holds a Bachelor of Nursing and a Master in Education, as well as Honorary Doctorates of Science from McMaster University, L’ Université de Moncton, Canada and the University of New Brunswick, Canada. She is the recipient of numerous awards including the University of California Los Angeles’ 2012 International Nurse 21 Award and the prestigious Jeanne Mance Award from the Canadian Nurses Association. She held the 2008-2009 Presidential Chair of the University of California, San Francisco and in 2009-10 served as the Francis Bloomberg International Distinguished Visiting Professor with the Lawrence S. BIoomberg Faculty of Nursing, University of Toronto. Oulton, who has broad experience as a speaker internationally, is the author of numerous articles and book chapters.

Carol has 20 years experience in commercial and residential real estate. Since 2003, she has been a self-employed real estate broker specializing in the San Francisco East Bay area.

Carol is committed to community service as evidenced in her volunteering in multiple local organizations such as the Foundation for Change and as manager of a competitive soccer team. Since 1999 Carol has shared her comprehensive financial skills as an active member of her church’s financial committee.

Wallace has over 30 years’ experience in financial services. His career has spanned responsibilities from branch management, business/commercial banking, and marketing management. In more recent years he has held the position of Chief Administrative Officer for Private Banking and Senior Risk Manager at the corporate level for one of America’s largest financial institutions. His experience in helping run various credit related groups, combined with many years overseeing the risk management of others, has provided Wallace with a very well rounded view of what it takes for a business to be financially successful.

Director of Marketing
Associate Producer, Men are from Mars – Women are from Venus LIVE!

Mike Styles is a veteran marketing and community development professional with over 30 years of experience including 15 years living outside the Continental United States. He is a seasoned traveler and brings The Gretta Foundation a unique blend of professional experience and international perspective.

Mike is also the Founder and past President of the Community Action Alliance, an ex-pat based community development organization based in San Ramón, Costa Rica. As President he provided the vision, leadership and organization for hundreds of U.S., Canadian and European ex-pats to successfully integrate in to and provide community service to the local community.

Prior to his work with the Community Action Alliance Mike was a highly successful marketing professional in the Entertainment Industry with what is now Live Nation. Mike was the first Vice President of Marketing for the Music Division of this entertainment giant. He was responsible for the integration of the marketing function of over 10 regional concert promoters; managed over 100 local marketers responsible for promoting 25,000 music events annually and generating over 200 million dollars in ticket revenue annually. Before Live Nation Mike also worked in the theme park industry with what was at the time Paramount Parks.

Always the adventurer Mike lived in Fairbanks, Alaska where he graduated from the University of Alaska, Fairbanks and founded and organized the Midnight Sun Run, Alaska’s largest footrace, which more than 30 years later, is one still of the most popular events in the State. He has always been an active member of the community he lives in.

Director, The Gretta Foundation
Director of Planning and Strategic Information at the Uganda AIDS Commission (UAC)

Dr. Nelson Musoba has worked at various levels in health systems of Uganda for the last 19 years. He is currently on 5 year sabbatical leave from the Ministry of Health and works as Director of Planning and Strategic Information at the Uganda AIDS Commission (UAC). UAC is the national body mandated with coordinating and overseeing implementation of the national multi-sectoral HIV/AIDS response.

Dr. Musoba’s most recent employment was as the Project Director for the Monitoring and Evaluation of the Emergency Progress Plan (MEEPP) project where he spent 32 months. MEEPP is a US government flagship program in Uganda provides technical support services for the monitoring and evaluation of the Presidents Emergency Plan for AIDS Relief (PEPFAR) within the “three ones principle”. MEEPP is managed by the Social and Scientific Systems Inc., a private for Profit Company based in the US.

Previously Nelson worked at the Ministry of Health as a Senior Health Planner at Uganda’s Ministry of Health planning department.  A big component of Nelson’s experience has been in Uganda, where the health sector has been implementing reforms over the last twenty years. Important among this is the Sector Wide Approach for health development [SWAp] and donor coordination, Public Private Partnership for Health (PPPH), decentralization of health services management and delivery and the development of Health sector policies and plans.

Nelson has been involved in the health sector reforms and played key roles in the health sector processes given his deployments at various levels in different capacities for example at service delivery level (hospital, health sub-district and district level), and at the policy level. At the Ministry of Health Nelson’s assignments included working as Secretary to the Health Policy Advisory Committee (HPAC) a key structure at the Ministry of Health that provides policy guidance, resource mobilization, oversight on implementation and M&E, He also served as Coordinator for the Global Fund to fight AIDS, TB and Malaria and secretary to its Country Coordinating Mechanism. He was instrumental in reviving the Global Fund grants in Uganda following the suspension in 2005. Dr. Musoba also served as the coordinator of the Global Alliance for vaccine Initiatives at the Ministry of Health in Uganda.

Nelson’s educational background includes: Master of Public Health (MPH) from Makerere University Kampala and Bachelor of Medicine and Bachelor of Surgery (MBchB) from Mbarara University of Science and Technology. Nelson had done several short courses covering a range of subjects in public health from all over the world and is also widely travelled. In 2012, he participates in the international leadership program for Health as guest of the US department of state. This program took him to 5 different states in a period of weeks to understudy how the US federal system works in the context of health services delivery.

Nelson is a human rights advocate and was the Founding Executive Director for Action Group for Health human Rights and HIV/AIDS (AGHA – Uganda) a nongovernmental organization (NGO) that brings together doctors, nurses and other advocates interested in promoting the right to health. He has authored a number of publications most especially leading the government team to produce government policies and strategies.

Subject to the terms of this Agreement, you may use the Information solely in whole for editorial use by press, media and/or industry analysts. This right to use is personal to you and is not transferable by you to another party. You may not alter, or modify the Information, in whole or in part, for any reason.